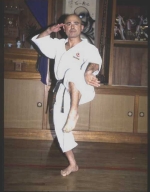 Narahiro Shinjo, Seiyu’s second son, is often lost in the shadow of his famous brother. Narahiro also inherited his father’s vigor and relentless approach to karate and is every bit as accomplished as his older brother. He has also traveled internationally teaching and demonstrating Uechi ryu karate.

Narahiro Shinjo placed first in kata in five of the eight Uechi ryu tournaments following his brother’s retirement. He placed 4th in the Okinawan world tournament in 1997.

The Shinjo Dojo of Kadena, Okinawa is often called upon by the Government to perform demonstrations in Okinawa and around the world. Seiko Toyoma and Kiyohide Shinjo were given the honor of performing karate for the President of the United States and other world leaders at the G-Eight Summit in Okinawa in June 2000

“Live life easy and peacefully, but when it is time to fight become ferocious.”